As a live performance artform, cyberformance is fleeting, ephemeral and often leaves little trace for those who come after; this part of the 121212 festival (5-11 December 2012) seeks to remember past performances by creating an opportunity for artists to remount their work and for new audiences to experience the shows live.

Scroll down for more information about each show: 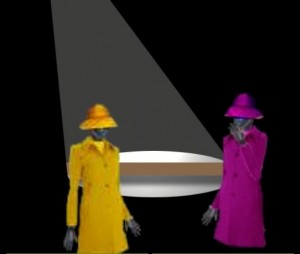 “… an exercise in reproducing as faithfully as possible Samuel Beckett’s precise stage directions and script, in the online environment.”

Freeze Flight or Fight, or main reactions to rejection

This was one of the first cyberformance works created by UpStage regulars Suzon Fuks and James Cunningham (Igneous, Australia/Belgium – and they will be in the USA for the 121212 performance).

“A cathartic cyberformance, on the way to acceptance ‘with glorious rays of hope, humour, and tribal encouragement’ … please, prepare your letters of rejection, how did you feel about them, your stories …” 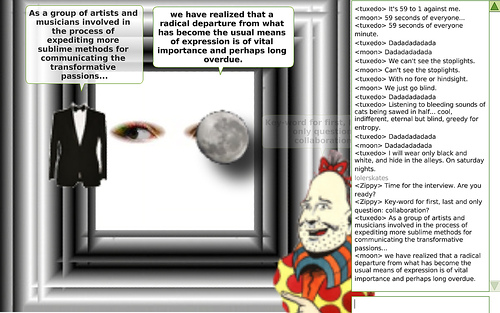 Another regular UpStager, Miljana Perić (Serbia), cut her cyberformance teeth with this show.

“This cyberformance addresses the position of the contemporary musician in a relation to predominantly scopophilic regime of the Artworld based on information technology. Standard phonocentrical practice will be replaced with poetocentrical praxis by quoting, paraphrasing and mixing up the lyrics of Tuxedomoon. Instead of counterpoint techniques, it involves the counter-soundpointless tactics, which symbolise the protest against disregarded role of music in cyberformances in general” 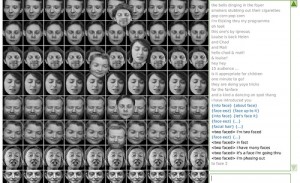 A face-to-face meeting on the surface of the interface, devised and performed by Igneous (Australia/Belgium/USA) and Helen Varley Jamieson (NZ/Germany). 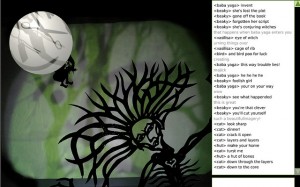 This cyberformance adaptation of a traditional Russian fairy-story also informed the exhibition which launched UpStage V2 and the inaugural festival; devised and performed by Rebekah Wild (Austria) & Vicki Smith (Aotearoa/NZ). 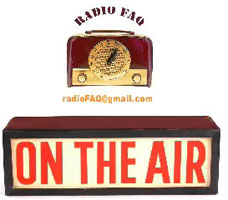 ActiveLayers restage the third act of Calling Home, in honour of Doug Leonard who passed away in 2011. Doug played the voice of Grand Uncle, a distinctive radio announcer interviewed members of the audience, developing the stories of four characters in collaboration with them. ActiveLayers are Cherry Truluck (UK), Liz Bryce (NZ), Suzon Fuks (Australia/Belgium) and James Cunningham (Australia). 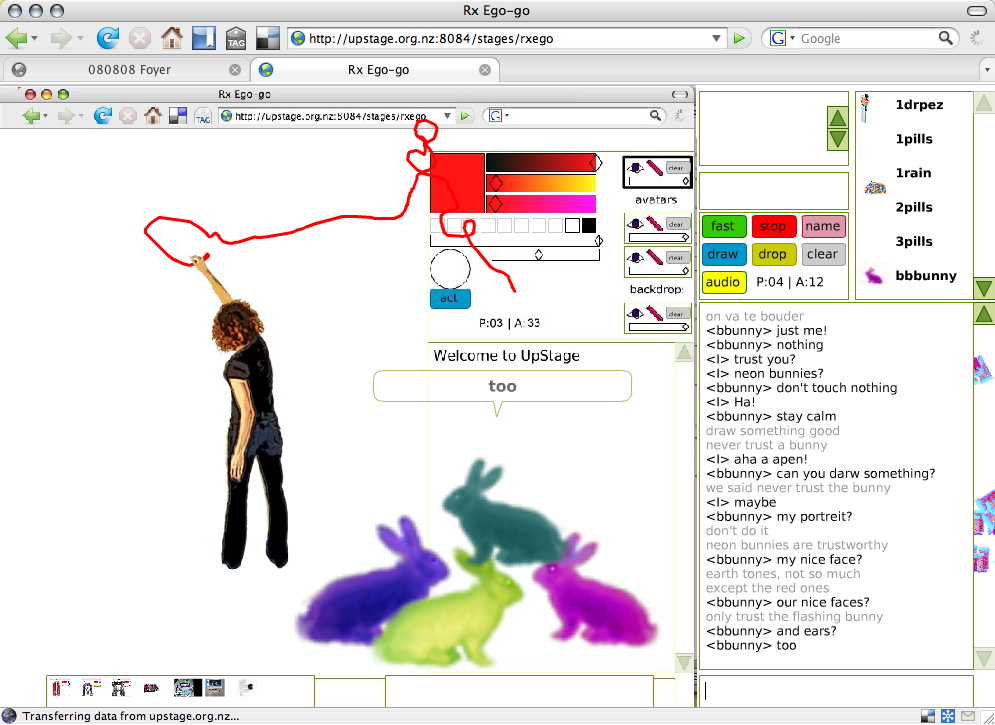 Can Flowergirl save the world from Orangebomb? Chad and Mali Duckitt (Australia) were just six years old when they created this show in 2008.

With assistance from Louise Phillips and Helen Varley Jamieson. 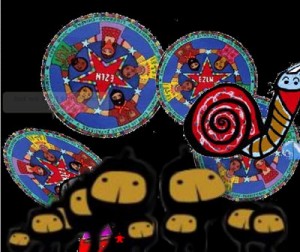 “Our private/pirate performance is participative cyber dedication to the birthday celebration of Emiliano Zapata. It will be organised in the ATMoAsphere of a creative and common gift economy practice. This means that Automated (story)Teller Machine of Author, as a part of traditional artist / musician performing, will be audio-covered with participative cyberformance of partysans who are free to Come! to listen and play music, make some noise, to clap, chant, chit- and cheat-chat in the name of Zapata, or just in their own name. Entry/ism is free, but non-entering could cost us a lot; so, should we still/silently ask ourselves – is there a vice versa?”

“One butterfly moves its wings and a tsunami happens.” 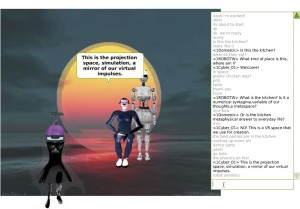 Step into the kitchen of the future and meet the mixed up characters who inhabit this new REALity, with UpStage regulars Katarina Djordjevic Urosevic & Jelena Lalic (Serbia).

The dish as a metaphor, is a place outside the traditional time and space, a place that has a specific Temporal time, composed of digital fragments, a place of the Newspace, Hyperspace, PARAspace… Virtual kitchen is a transition from metaphor in metamorphosis, for example, nature is a metaphor for artists who study substance of inner life, while the metamorphosis establishes principle of reification, i. e. synthesized images that are not real but of pseudo-simulation. Virtual kitchen is a reflection of SF presence (actuality) because the past images are mix of various media simulacra, stories, discourses. Subject has become another utopia such as history… 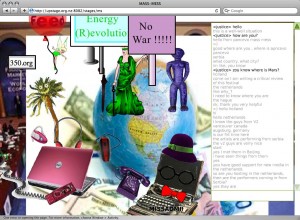 A search for the story of context in the fluidity of mass production of content; devised and performed by Katarina Djordjevic Urosevic & Jelena Lalic (Serbia).

“The meaning of the symbols encoding a message is completely irrelevant, though a binary digit may represent the toss of a coin or the fate of the universe. A value regardless of the contexts in which it was embedded. Conceived in this way information was independent of context, a probability function with no dimensions, no materiality, and no necessary connection with meaning. Through the study of structures mass media and independence in hierachy of information, without center, looking for a ways how to strike a balance between reality and fiction, and how in the conflict of contents find essence of the narrative …”

S/Zports: A Training for the Possible Wor(l)ds 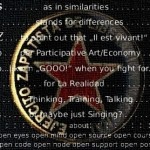 In the support of the everyday visible, invisible, noisy or quiet struggles for developing alternative social relations! As the sub-port for the cyberLettristic initiative! Several training acts for passing through the contexts of Seeing vs. Zapping of meaning events will take space! During the process of decomposing the problem/notion that traditional warship’s enslaving is re-placed with sport-industry-caused-spectactors’-passivity, we will take active part in the battle: Team of Letters vs. Army of Words. Our détournement starts like this: S as in Situations – „/“ stands for differánce – Z is for Zooming into the P (which re-presents the Participative Performing) – O symbolizes all kinds of Oppositions – R starts the re-vocation of Rimbaud’s words: “Real life is absent. We are not in this worLd.” – T begins the Training event – S/$ = to Sign or not to Sign to it? – the „:“ is for etc. And so on. By Miljana Peric and collaborators. 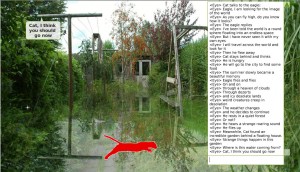 This performance will be a poetic journey on the source of ideas, and how we build ideas from images that come in our mind. It will play with perception, the focus, the distraction of it, time, size and distance, the imagination, and the memory of things and scenes. A continous stream of shifted focus using words, sounds, and images, will lead or distract the visitor in their journey.

Devised and performed by Petyr Veenstra, Floris Sirag & Gabriella Sacco (Netherlands/Italy). Flat Earth has also been performed at the UpStage Apéro at Electropixel, Nantes, France in May 2012.

Magfalda meets the World in Pieces 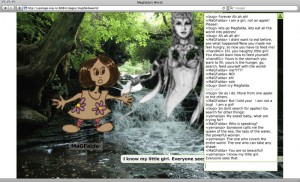 An innocent and unpretentious journey to the (re)discovery of the world in pieces that surrounds us; with Gabriella Sacco and Valentina Tibaldi (Netherlands, Italy).

“Whatever our faiths and beliefs, the Earth is surely telling us something, trying to be heard. The world that our ancestors knew is gone. Magfalda meets the world in pieces is an innocent and unpretentious journey to the (re)discovery of the world in pieces that surrounds us. Once again, the travel outside reveals something of our most intimate essence.”