The fourth annual festival of performances in UpStage will be held on 10 October, 2010, featuring a record 17 shows made by more than 50 artists from around the world. 101010 began at 8pm New Zealand time on Sunday 10 October and ran until 4pm the next day (with a break in the middle). 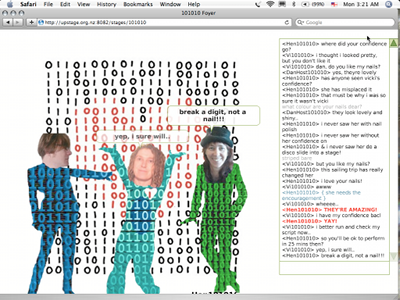 The 101010 UpStage Festival is supported by the voluntary efforts of many people, most especially the adventurous, innovative and imaginative artists creating the performances, and the enthusiastic organisers of the RL access nodes. THANK YOU!