On Thursday 24 May, UpStage was featured at the Electropixel festival in Nantes, France. 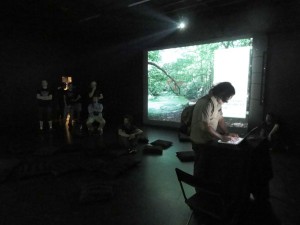 During the afternoon, Helen held a workshop to introduce participants to the UpStage platform and the idea of live performance on the internet.

In the evening at an “UpStage Apéro”, two cyberformances were presented : “Flat Earth”, by Petyr Veenstra, Floris Sirag and Gabriella Sacco, and “Veni! Ελθέ! Dodji! to the Zapata Private/Pirate Birthday Party. And, Vice Versa …”, by Miljana Perić, Jelena Milosavljević Rubil & Julijana Protić. This was an opportunity to announce the “Walking Backwards into the Future” programme of the 121212 UpStage Festival – where both of these shows will be performed again. This retrospective of performances from past UpStage festivals takes place 5-11 December, followed by a programme of new performances in various platforms, “Testing 1 2, 1 2, 1 2” on 12 December. 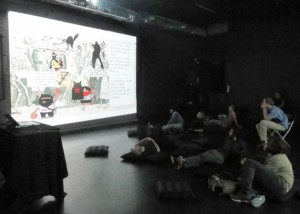 As well as the festival audience in Nantes and the online audience, there were 10 people watching a screening at Odin Teatret in Denmark, from where Gabriella Sacco performed in “Flat Earth”. Both performances were well-received by the audiences at the venues and online.

In amongst the rest of the busy festival programme, there was a brief period at about 2am one morning when Helen caught up with Jenny Pickett and Julien Ottavi from APO33 about the ongoing development of DownStage. Two funding applications are in process, which aim to enable the development of the new platform alongside the creation of a trans-European collaborative performance. While we await the outcome of these proposals, Martin continues to work on the code and interested developers are welcome to join.