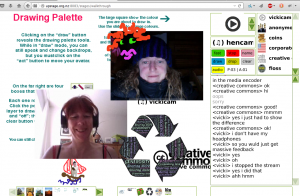 The UpStage team offers online or on-site workshops to introduce groups and individuals to the concept of cyberformance, how to use UpStage, creating graphics for UpStage and devising performances using UpStage. Workshops are customised according to each group’s needs.

“There is no better arena or forum for students to learn the beginning steps of virtual theatre than Upstage.” Nancy Reilly-McVittie, senior lecturer, Manchester Metropolitan University.

To learn about UpStage:

A basic introductory workshop can be as short as two hours; a longer workshop of 15-20 hours will include devising and presenting a short cyberformance.

Technical requirements for workshops are an internet-connected computer and headphones for each participant, and a data projector and screen for the workshop tutor’s computer. UpStage uses specific ports which may need to be opened if the internet is being accessed through a firewall – this must be tested beforehand.

To request a workshop or for more information, email info@upstage.org.nz

For several years, we held open walk-throughs on the first Wednesday of every month, where new people can learn how to use UpStage and those who come regularly have an informal jam together. Lately we have been too busy to do this quite as regularly, but open sessions are still held. Dates and times are advertised on this site, and you can join the Announcements list

to be sure to know when one is coming up.

We can also teach workshops remotely, and have done so for groups in the UK, USA and Europe. Remotely-taught workshops have ranged from two-hour introductory sessions to a full day or a number of shorter sessions over several days.

“After your workshop, we had a really rich dialogue about the relationship between the virtual and real spaces of theatre – what is possible, what is not. As a result, I would like to offer UpStage as one of the performative environments that the students in my intro course next quarter can create performances within.”
Adriene Jenik, Associate Professor, Computer & Media Arts, Visual Arts Dept., University of California, San Diego