One of the performances from 101010, S/Zports: A Training for the Possible Wor(l)ds was restaged on 10 and 17 August 2012 as part of an exhibition of extended media, “Zagrebi Dublje (Scratch Deeper)” at the ULUS Gallery in Belgrade.

Four of the original artists – Miljana Peric, Julijana Protic, Suzon Fuks and Jelena Rubil – were joined by Vicki Smith, Valentina Tibaldi and Helen Varley Jamieson, with a guest appearance by Andrea Aß on Friday 17th. The online audience and those in the gallery participated in a series of training acts for passing through the contexts of Seeing vs. Zapping of meaning – a process of decomposing the problem/notion that traditional warship’s enslaving is re-placed with sport-industry-caused-spectactors’-passivity. Is it a coincience that the Olympic Games were taking place simultaneously?

The exhibition runs from 9-21 August; more information in Srpski here or download a media release in English. 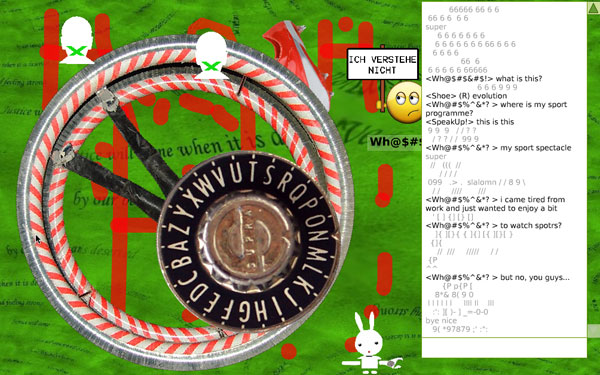