Alexa Wilson writes about her experience of collaborating online with Cat Ruka to create Die Totezone for the 101010 UpStage Festival.

The process of working with the Upstage 101010 format and presentation for me as a performance artist from NZ based in Berlin collaborating with a Maori performance artist in NZ _ Cat Ruka – for our work ‘Die Totezone’ (‘Dead zone’ in german) was very exciting both conceptually for us and also cross-disciplinarily working with online media and internet performance as an extension of both our practices working specifically with the representation of ‘(cultural) identity’. 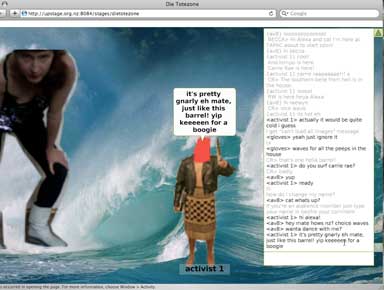 It enabled us to work together literally from other sides of the world- as Cat rehearsed from New York where she was performing at the time and then performed the work from NZ- while I was in Berlin, which was interesting as a cross-cultural experiment both in rehearsal and performance. I felt that this experience was almost an extension of the already prevalent use of online social networking but in a much more conceptually honed and excitingly creative way, especially from across the world when you’re away from your own country, and a way to literally make performance through such communication in a performance context which was for me very satisfying.

The wide variety of media accessible in the Upstage template made it fun for us and while we are both interested in political art making our use of humour, fun and anarchic layering of mediums could be fully utilised and expressed within this platform. We were able to layer ideas, images, text, drawing and sound which created backdrops, evoked feeling, spoke directly and also chaotically broke down boundaries between who was actually ‘performing’ – identity wise – as we had access to each other’s media. This was fascinating to work with. What we created was something unique and quite wild – a cross-cultural collaboration with an intention of healing warlike cultural/physical spaces across cyberspace. 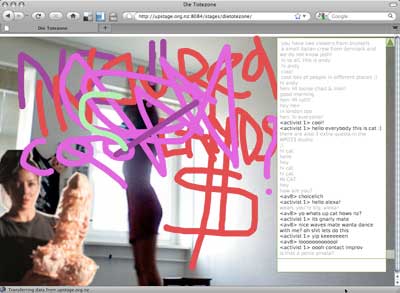 It also assisted a beautiful collaborative process between us which in itself was healing for us both as artists exploring and experiencing different lands, but also within a dialogue of mainly images and sound between Maori and white NZ culture online. A direct mash up of images related to our experience of the deadzone _ between cultures/identities- and the lostness and communication/healing therein was quite potent within this platform. This was also accessible to the rest of the world at the time online and screened live in particular venues worldwide including at Tempo – Auckland’s Festival of Dance – and the audience commentary down the side made it more exciting to peform. Audience chipping in added to the hilarity of what we were already doing.

Performing from across the world from a culture far from NZ in Berlin with an artist in NZ using this Upstage technology became emotionally charged due to distance and heightened the themes of the work – which was the intention from the outset. It was a very interesting technological engagement for me as a usually live performance artist to work formalistically and conceptually in this way and also as a political collaboration between cultures in NZ, which is a very difficult thing to do and largely unexplored territory. In this way, often as the internet does, distance created a safe intimacy.