The 121212 UpStage Festival of Cyberformance took place 5-12 December 2012 and consisted of two parts:

Marking a turning point in what has become an annual event, 121212 was the last year that we could use this date format, and also this year development started on a new engine for the UpStage platform, DownStage, extending the possibilities of what we can do.

We opened up the festival to artists creating cyberformance in platforms other than UpStage, as there are now many other interesting platforms, and this resulted in an excellent range of proposals.

The programme of online performances, which could be watched from internet-connected computers anywhere in the world, was augmented by “real-life access nodes” in 14 locations around the world; click here to see the 121212 node line-up.

Walking Backwards Into The Future

Proverbs from many cultures express the concept of “walking backwards into the future” – the idea of learning from those who have gone before us as we forge new paths. As a live performance artform, cyberformance is fleeting, ephemeral and often leaves little trace for those who come after, and so this part of 121212 seeks to remember past performances by creating an opportunity for the artists to remount their work and for new audiences to experience the work.

Sound-checking for a gig, a technician steps up to the mic and intones “testing 1 2, 1 2, 1 2” to test volume levels; in this part of the festival, we are testing many things: a new version of UpStage (v2.4.2); the variety of live performance being created in other platforms; the possibilities of collaborating across platforms; a new format for the annual festival; new partnerships and new relationships.

A cyberformance sypmosium, or CyPosium, was held on the 12 October 2012 (UK time), to remember, document and discuss the work of those who laid the foundations for cyberformance and those who are working in it today. Recordings and discussions can be found on the CyPosium web site. 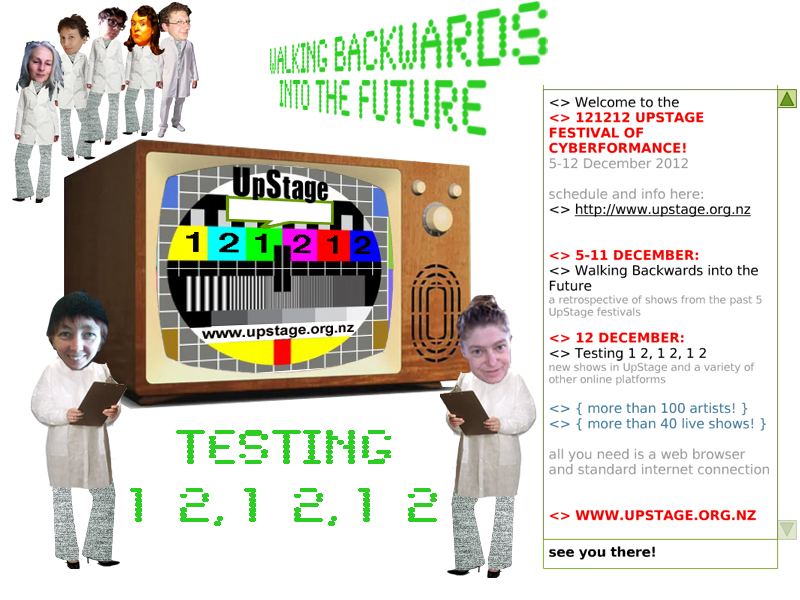