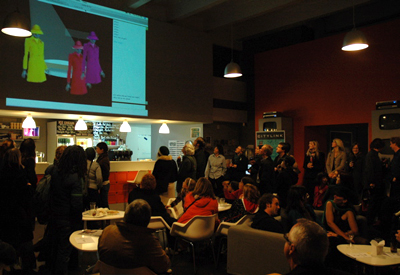 UpStage version 2 was officially launched on 28 June 2007, with a function at the New Zealand Film Archive and the opening of a two-week exhibition.

There was almost a scandal at the launch event when renegade cyberformance troupe Avatar Body Collision inadvertently began a rehearsal of Samuel Beckett’s Come and Go before a live audience. Fortunately, the company’s director, Tito Alberto, managed to halt the rehearsal in the nick of time, before any rights infringement occurred. The assembled crowd at the NZ Film Archive begged for more but a resolute Alberto insisted that they wait until the legally sanctioned performance, which will take place at 8pm NZ time on Saturday 7th July.

You must understand I not trying to destroy your pleasure, au contraire, I want you to be pleasured by me always.It ees just that the Becket Estage is vairy vairy particular concerning rights, you see? My name, my reputation, even my hairstyle, all are on the line when I agree to do this show. So please, do not suffer in disappointment, but come see ‘Come and Go’ and be prepared to be moved, to lose your mind and teeth a little, and maybe even scratch a little.
Titoxx