Please Stay Alert at All Times was on Thursday 9 August at 9pm GMT (find your local time here). 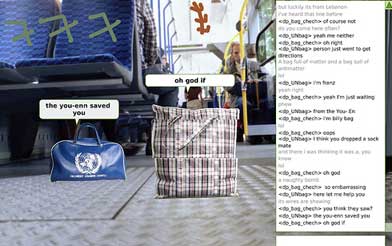 Disturbed by what I perceive as an increase in witch-hunt style racial profiling, arrests, detainees, ‘security measures’ and encouragement to report ‘suspicious behaviour’. I was motivated to make a piece of work that crudely and directly unpacks this historical tendency toward hysteria, panic and mistrust in the face of a manufactured ‘monster/witch’

Based around the date 07/07/07, the 2nd anniversary of the London Bombings, I began to look at the significance of the number 7 in religion, politics and popular culture.

Drawing parallels between the war against terror and the 17th Century Witch Hunts; I experimented with multiple texts, including sections from Millers ‘The Crucible’, as an historical template to explore the behaviour of society when faced with a perceived threat.

Comically playing with sections of speeches from ‘world leaders’ regarding their ‘war on terror’ set against mirrored words spoken by Damforth in the Crucible, I hoped to highlight their use of demagoguery to gain political power by appealing to popular prejudices, their use of religious language and the binary of good and evil, so that dissent is not merely unlawful but is associated with satanic activity.

The MI5 website tells us that our current threat level is ‘severe’ and that members of the public should always remain alert to the danger of terrorism and must report any suspicious activity. Through comedy and ridicule, I hoped to explore what it is to act suspiciously, how difficult it is to remain alert at all times, as well as unpack the disturbing language lifted directly from anti-terror campaigns from the across the world.

I envisaged the work being experimental, comical and fun, an interactive experience for the audience that might subvert this hysterical climate, that so many have come to accept.
Given the content of the work, the devising process had to reflect the current affairs of the time, so that this performance over a period of months changed quite dramatically. I also prefer to work through ideas in practice as research, giving the space for creative growth through interaction and exchange between the performers, myself and ultimately the audience.

UpStage has been an ideal forum to create work this way, with the freedom to play, experiment, and receive regular critical feedback. It is a form that is extremely accessible, encourages the absurd in me and opens up a world of humour that has me laughing to the point of wetting myself despite being quite alone sat in front of my computer! It has an unique language and the facility to create beautiful simplicity one moment, then quite intricate complicated texture the next. A world that allows gender swapping, bags to find love, words be characters and the ability to travel to any time or space imagined or not, with the click of a key.

I’ve found UpStage to be a supportive and inspiring community to be part of, with a large a varied network of international artists each with their own particular skill and unique outlook. Each piece of work during 07/07/07 surprised, amazed and had me glued to the screen, desperate for the toilet but afraid to miss anything! Up to now my practice has primarily been that of live performance, ‘real flesh’ bodies in space, this experience has opened up a whole new landscape, allowing me to connect with artists across the world without having to travel, to create work that I never expected and hopefully begin to combine/ integrate this virtual form into the world of ‘flesh’.