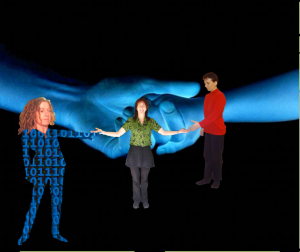 An improvised cyberformance on the topic of networked bodies, Digital Handshake, was performed at 6.30pm UK time on Saturday 8 November 2014, as part of the event Networked Bodies – Digital Performance Weekender (7-9 November). The performance took place simultaneously at Watermans

A handshake is a short ritual in which two people grasp one of each other’s like hands, in most cases accompanied by a brief up and down movement of the grasped hands.

Networks, despite many past promises of disembodiment and internationalism through the obsolescence of both bodies and geographical boundaries – promises now widely perceived as obsolete – are still experienced by subjects that remain both embodied and geographically situated (Cohen, 2012: 11) As Cohen argues, not only are networks firmly connected to material bodies and physical geographies, but they also play “an increasingly significant role in constructing embodied experience” (ibid), by both empowering and configuring the “networked self” (Cohen, 2012: 12).

The cyberformance was created and presented by Christina Papagiannouli and Evi Stamatiou on site in London, and online Helen Varley Jamieson, Miljana Perić and Vicki Smith. 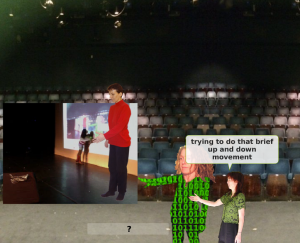 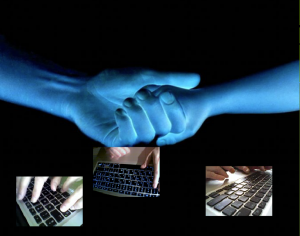