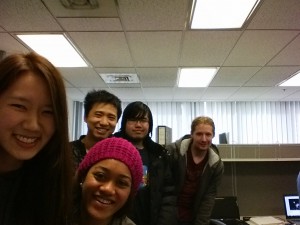 The second semester in 2015 is almost finished. AUT UpStage team has a couple of leaving members; Alyssa and Sia. William, Kelvin (Jing) and Joshua will continue to work on developing a new UpStage and maintaining the existing one till next semester (the first semester of 2016).

This semester, we have investigated some software architectures and programming languages for the new UpStage as we also mentioned in the previous post. For the software architecture of the new UpStage, we have decided to use Event-driven architecture together with MVC pattern. For the programming language, Java will be used for the back-end and HTML5 and JavaScript will be used for the front-end. Java is a language taught in AUT so it seems a good thing for the future student developers because they will be already familiar with this language. We have also investigated about data storage for the persistent data of UpStage. The existing UpStage is currently using XML, but we have chosen JSON to use for the new UpStage.

We have contacted Martin who is the developer of DownStage via Email to get some useful ideas of designing architecture for cyberformance. He replied us with information about the architecture of DownStage that he is planning to develop in the future. DownStage is only a back-end abstracting the network and event layers which offers API’s for a front-end communicating with RPC mechanism. The approach he is going to implement is CQRS pattern (See https://martinfowler.com/bliki/CQRS.html). The main idea of the overall architecture is “Separation of Concerns”, which we think that is well-designed. We also thought that is would be great if we can build the new UpStage on the top of his system if it existed. His architecture seems to be very modular and requiring high level of knowledge of designing architecture. There are simpler ways to implement the new UpStage instead of using the architecture he provided. We will keep considering the concept that he has for DownStage while we develop the new UpStage to make it modular so that it is easy to maintain and extend in the future.

The leaving members want to say that it was a pleasure to contribute to this project and hope to see the new version of UpStage soon. The ongoing members will keep you updated.

Thanks from the AUT UpStage Team