For two weeks in March 2014, I was artist-in-residence at the University of Creative Arts, Farnham (UK) at the invitiation of Yuwei Lin, course leader for Media and Communications.

I had never been to Farnham before. It is an historic town in south England, situated on a former Roman road and overlooked by the remains of a 12th century castle. Many of the buildings in the town centre are several hundred years old, such as one of our favourites, the Nelson Arms tavern, which is housed in a building that was originally built in the 14th century as cottages for workers on the castle farm. Very “olde worlde”! The UCA campus here was originally founded in 1866 as the Farnham School of Art, and today occupies buildings that were purpose-built for the school in 1970, shortly after it merged with the Guilford School of Art to become the West Surrey College of Art and Design; ongoing mergers with other neighbouring schools led to the University of Creative Arts forming in 2008. 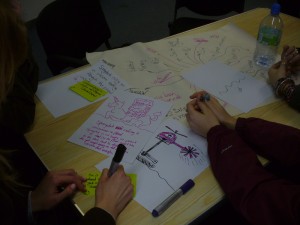 My residency comprised lectures about cyberformance and UpStage workshops. On Thursday 13 March we gave a public online and on-site presentation, during which some of the workshop participants gave a work-in-progress presentation of their show The Ultimate Flood Survival Guide. Audiences joined online and at the venue in Farnham, where I gave an introduction to cyberformance and what we had done in the workshops, and we had some discussion. This was followed by a performance of Balloon, by Petyr Veenstra, Floris Sirag and Gabriella Sacco, which premiered at the UpStage 10th Birthday in January. Seeing the results of a few days of workshop alongside a performance that has been crafted over time by experienced UpStagers and developed through several performances gave an excellent demonstration of the possibilities of cyberformance. On the one hand, a performance can be put together quite quickly with a variety of input from a large and diverse group of participants without any experience in cyberformance, and presented in an imperfect but engaging format; while at the other end of the spectrum a sophisticted, nuanced performance can evolve over time and make use of many subtle techniques within the UpStage environment.

A major achievement during the residency was the installation of UpStage v3 beta on the UCA server. UCA technician Darren Cayley and his team worked to get it installed, including the voices and other dependencies. The first stumbling block for the install was the version of Twisted that UpStage requires: due to its age, it works with Twisted 8, but the latest version of Twisted is 12. So this is something that needs to be more clearly stated in our installation documentation. The next issue was ports – often a problem in universities! We managed to get full access to UpStage over the university’s ethernet connection, but getting the same access via Eduroam wifi and externally proved to be a little more complex. In the end we gave the presentation from the UpStage server in NZ to be sure that everyone would be able to access it, but we had been able to do all our preparation and training on the UCA UpStage. There are very few other UpStage installations that we know of, so it was very satisfying to be able to see it successfully installed by people who haven’t had anything to do with its development. 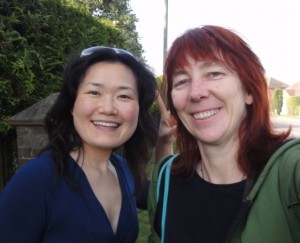 Now, it’s the final day of my residency and I’m working with Yuwei on documentation. It has really been all too short – I haven’t had time to visit the local museum and most of the meetings with other artists and staff based here has been brief encounters in the corridor. Although I did have time in the first week to go Scottish Country Dancing and see the Alton Operatic Society’s production of Orpheus in the Underworld; and I’ve done tai chi twice while here. And, now that UpStage is running on the UCA server and if Yuwei has ideas for incorporating UpStage into her teaching, this could be just the beginning of something more … and before I go, Yuwei is very curious to do a spot of geocaching with me – something I picked up from our AUT student developer Vanessa Henderson and have been trying out around the world. It’s a beautiful day outside so I think we will be doing that quite soon!