The current AUT student developer team are on track with UpStage version 3 – the beta version is due at the end of October and v3 itself will be launched as part of the 10th birthday celebrations, on 9 January 2013.

Version 3 will bring together Martin Eisenbarth’s “video hack” fork with other developments done by the previous student team at the same time (covering the period from late 2012 to mid 2013). Martin’s work has made a lot of other new features possible as well, so wherever they can the students have been implementing these features. 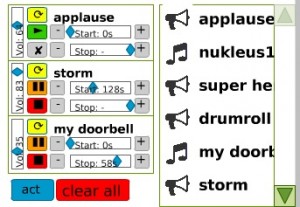 Some new things to look forward to:

and many other enhancements and bug fixes, particularly in the workshop area.

The biggest challenge for the students so far has been to untangle the new and old code, comparing the two versions and working out what to use from each. Happily, the students are having a lot of fun wrangling the somewhat messy code into submission – they get a lot of satisfaction from finding problems, working out what’s wrong, fixing it and seeing the fix work.

The change to Github has been a successful one: most of the current team had not previously worked with Sourceforge, so they didn’t have to do any relearning, and have found Github to be an incredibly useful tool that supports the way they are working. It also means that their work is accessibly documented for other developers and UpStage artists to follow and comment on (have a look yourself here). The audio time slider feature in particular has generated quite a bit of discussion and various opinions from UpStage artists.

We are now waiting excitedly for the beta version to be installed on the UpStage development server at the end of the month so that some serious testing can be done, as well as preparation for the birthday performances.