Once again the online UpStage Festival will be augmented with live screenings of many of the performances, at “Real Life” access nodes around the world. Nodes are physical venues that screen sections of the UpStage festival programme for local audiences.

The following nodes have confirmed for the 121212 UpStage Festival of Cyberformance (times shown are LOCAL times for each node):

If you’d like to host a node in your area, read here for information about what’s required and then contact us). 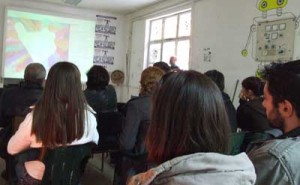 An image of the Galerija Elektrika node during 101010, in Pancevo, Serbia.