Software projects are like gardens: they are ecosystems that require ongoing nurtuting and maintenance so that they can flourish; and they have life cycles – they evolve, and sometimes they die. At the 2019 Libre Graphics Meeting in Saarbrücken, the UpStage team led a session titled “Life cycles and sustainability of open source arts projects” to discuss this side of software development, and how we cope with it as loose un(der)funded collectives of artists and developers. Helen Varley Jamieson was in the room at the lovely old building of the Hochschule der Bildenen Künste Saar (Art College) with eight participants, Vicki Smith was on her boat in New Zealand and Paul Rohrlach beamed in from Canada. This session aimed to be an opportunity for people involved in, or interested in, independent arts (and community/social) FLOSS projects to come together to share our experiences of life cycles and sustainability.

It was great to be at the LGM again, surrounded by people who are developing and working with FLOSS graphics software and related projects – from the big ones like GIMP, Inkscape, Scribus and Blender to a whole host of little projects doing weird and wonderful things – like Drawpile and UpStage. By coincidence Douglas Bagnall, the original developer of UpStage, was also there, presenting one of his own art projects; he also joined our session. Another participant was Elisa Godoy de Castro Guerra from FLOSS Manuals Francophone, who has now volunteered her graphic design skills to UpStage – merci beaucoup Elisa! We immediately fixed a few problems on the website, and will soon bring her on board with Limelight, the new software for UpStage. 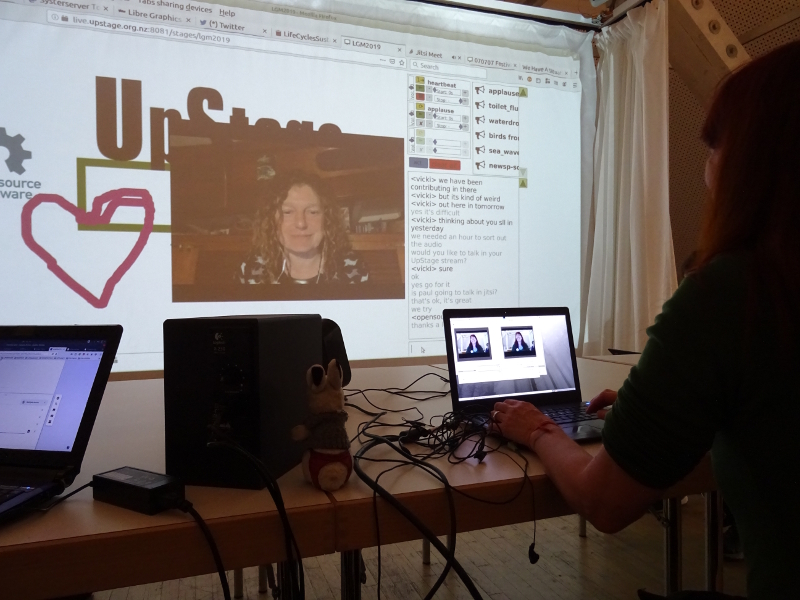 For our session, we used UpStage, jit.si and Etherpad to facilitate the remote connection and to document the discussion as we talked. You can see – and contribute to – the etherpad here. We began by presenting UpStage and where this project is at in terms of its life cycle and ongoing sustainability, then invited all the participants to share their relevant experiences. We then posed a series of questions for discussion, writing everything into the etherpad as we went.

We discussed how FLOSS arts projects can be funded, including grants, crowd-sourcing, and having other jobs; reasons why projects fail (apart from lack of money); ideas for attracting developers; and future sources of funds or income streams. Unfortunately we ran out of time when we got to our last two questions – what insights can we gain from the LGM community, and what might the future hold for our projects – but we had plenty of food for thought and ongoing discussions. Some later presentations at LGM also touched on these areas, such as Livio Fania’s talk “User Perspective in the Funding Model” and “Turning the Community into a Business” by Tatica Leandro.

As well as the more technical talks, demos and workshops there were several presentations that looked into other aspects such as using FLOSS in arts education, terminology of “open source” versus FLOSS and other terms, and a session led by Larisa Blazić titled “From Bauhaus to Libre Graphics: Image-makers for social reform and environmental protection”. As well as talking about Bauhaus – 2019 being the centenary of the Bauhaus movement – the discussion roved around the environmental impact of computing and software, then got into a really interesting discussion about gender equality in the FLOSS community. A range of opinions were expressed, from those who hadn’t perceived that there was a problem to a woman who has been working to address the issue since the 1980s. We didn’t come to a general consensus within the group, but it seemed that most people felt it is something that LGM could address, and it was an important discussion to have (I hope someone recorded it!).

Overall it was very worthwhile to attend the LGM and lead our session on life cycles and sustainability. We have a new volunteer, and quite a few ideas to follow up with regard to UpStage’s ongiong sustainability. Watch this space!